Mbau the CREATOR | The Tea

Coming to you live and direct from #YMornings, Kandis Kardashian serves the tea. Sip on this:

Cassper Nyovest just spilled the tea on how he and his baby mama Thobeka met. Joining in on the viral ‘how it started, how it’s going’ challenge Cassper posted a screenshot of when the 2 slid into the DMs back in 2017. In the image, the pair refer to each other as baby mama and baby daddy even discussing their plans(jokingly of course) to have a baby. And well, as if it were written in the stars… The couple welcomed their baby boy just last month.

Yoh, things are H for HECTIC there by Britney Marelize Spears. After her lawyer likened her mental health to a comatose patient it doesn’t look like its going to get any better.

Britney is currently under conservatorship (meaning she’s not mentally fit to make decisions regarding her life). Her father Jamie was appointed as the conservator AND HE IS GOWLING HER MONEY!

Social media recently started a #FreeBritney campaign after her weird TikTok vids raised some red flags and it came to light that she’d being forced to perform. At a recent court hearing, her dad demanded that she be present and that’s when her lawyer said she’s not mentally fit to even engage them at this point.

‘The Real’ co-host Jeanie Mai, who is was recently engaged to Jeezy – The guy who gave us that bomb verse on Usher’s Love In This Club – ‘Have u ever made love to a thug in da club’ – says she will take the submissive role in her marriage as per the Bible.

She was also quick to clarify that it doesn’t mean she’s the ‘lesser’ but instead it means that her husband-to-be will take the lead in their marriage. She adds that people always turn the whole concept of submission into something it isn’t.

Did Khanyi Mbau basically just admit that she ‘kinda’ invented Pearl Thusi and is the reason she has a career.

Well! According to Khanyi she was originally offered the hosting gig on The Real Goboza but at the time, in an attempt to ruin her, one of her exes leaked her nudes and she was subsequently given the boot which made room for Pearl. She revealed all of this to Pearl on the latest episode of BET Africa’s Behind The Story.. wait… So Khanyi was supposed to be Queen Sono? 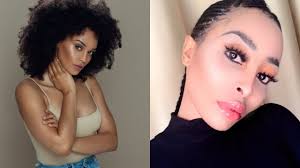 Major SIDENOTE: After being in debt of $53 million just 4 years ago, Kanye West is officially worth $5 Billion!

Thanks to Kim Kardashian who helped him get out of it!